Why do I have to perform multi-pressure measurements?

For larger nanopores with a mid to high pressure differential, this is generally true. For smaller nanopores this is often not true. Electrokinetic forces start to become significant, and the surface charge of the sample particles often differs from that of the calibration particles. By measuring the frequency of blockade peaks at two or more applied pressures (resulting in different flow rates of fluid through the nanopore), Izon’s Control Suite Software is able to calculate the proportion of the blockade peaks that are due to the flow of fluid through the nanopore and hence calculate very accurate relative concentrations of the unknown sample particles.

Figure 1 below shows an example of real data recorded on a small (NP100) nanopore. Two particle sets of similar concentration were measured at three pressures. In this example, calculating the concentration of the 70 nm particles using a single pressure measurement results in a very large error.


Single pressure concentration measurements assume a count rate of zero particles at zero pressure. For the plain, uncarboxylated polystyrene particles (100 nm) this is almost always the case, but the highly charged carboxylated particles (70 nm) are passing rapidly through the nanopore due to electrophoresis.
In this example, calculating concentration by comparing the count rates of particles at just one measurement pressure results in a very large error (that decreases with increasing pressure). Table 1 lists typical calculation errors at each of the three pressure sample points shown. 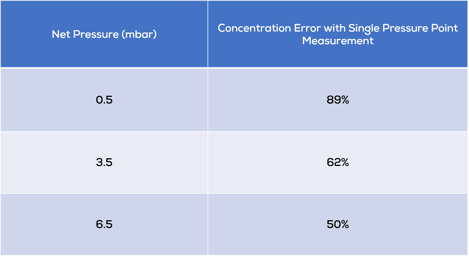